LONG layover in Vienna?  Why the hell not.  Vienna is one of those cities whose name conjures vivid visions of history and culture.  It was totally different from the location we were coming from, and the layover allowed plenty of time for a bonus speed vacation.  This was the first time we’d experimented with the concept, and we are happy to report that it’s the shit.  We landed in Vienna at 5:30 PM and had until 7AM to head back to the airport and catch out flight home.

WE dropped our stuff at the stately, but cozy Hotel Am Parkring, and found a fantastic room, especially for the price.  $80 got us a luxurious room overlooking the city with a balcony, and breakfast included. WE splashed some water on our faces and headed out into the Vienna evening.  It just feels good and exhilarating to breath the air of a new place.  It has a different weight and character.  We had no idea what to expect, had done no research and had no expectations.  This was bonus, the icing on the cake.  Just being there felt like a dream within a dream (it was on the way home from the magical honeymoon we wrote so extensively about).

We wandered the street giddy with accomplishment and cultural whiplash.  Grabbing the typical tourist map from the front desk, we set out to check off as much as we could.  With a “WE’LL SLEEP WHEN WE’RE DEAD!!!” attitude we vowed to use every second taking in Vienna.

Our first stop was the world famous Stephanplatz with it’s looming cathedral, the Stephansdom.  One of the tallest churches in the world, Stephansdom towers over the plaza and is the de facto center of Vienna.  You can feel the weight of history in it’s soaring walls, and it certainly stands out as a incredible example of Gothic architecture in all of Europe.

NEXT we found ourselves on the Graben, a huge avenue which has roots all the way to the Roman empire.  These days it’s a pleasant siteseeing center to stroll, with lots of expensive brands adorning the stores and tourist traps abounding.  We checked out a couple of the more interesting traps in the search of our main target, schnitzel.  We couldn’t find anything that seemed right, but stopped in a few kitschy joints . EVENTUALLY we veered off the Graben and just basically wandered.  To be honest we didn’t even really know what we were seeing.  It was all really cool though.  We definitely walked through the Spanish Reitschule, gravitating toward it because it said “Spanish”, and although it was impressive we had no idea it was a revered horse riding school until just now looking up how to spell it.  We’d gone off script and were just wandering, following our whims. OUR wandering ways never lead us astray, and eventually we stumbled upon the Rathaus Film Festival.  Projected on the gothic City Hall building, a series of movies entertained the crowd.  More important to us were the dozens of beer and food stalls packed into the park surrounding the building.  Our second most important target was achieved here, al fresco in the festive atmosphere.

Having a pretzel and hefeweizen in Vienna; check!

THE pretzel piqued our hunger, and we focused our efforts for the main attraction; schnitzel.  After dark the city became surprisingly dead.  It was late August, so the tail end of the European vacation season, but still we were shocked that the place shuttered down so early.  Eventually though, we stumbled across a great find.  Restaurant Ferdinant was EXACTLY what we wanted for dinner in Vienna.  And thankfully it was open “late” by apparent local standards.  Fun fact for our fellow non german speakers, “Wein” is Vienna in German, and “weiner” means “being of Vienna”.  weinerwurst = Vienna sausage, weiner schnitzel = the real deal.

In Vienna accept no other weiner.

AFTER we ate we wandered the streets to alleviate the meat sweats.  As said above, the streets were deserted, but we enjoyed the solitude and soaked in the ancient ambiance.   The most lingering thing we saw that night was the installation called Yellow Fog, by artist Olafur Eliasson.  For one hour each day at dusk, the piece floats ethereal steam over an other worldly yellow light.  The result is mesmerizing, and after taking it in we were left feeling so lucky to have witnessed the fleeting performance, accidentally and having no clue it was even there. SOON enough our brazen “sleep on the plane” plan turned into “I’m old and tired”.  And in all honesty, wandering the empty streets this night had us running out of motivation.  We did manage to find Kaffe Alt Wein for a final couple pilsners.  The place felt cool, and steeped in dive bar credentials.  Upon some Wikipedia research it seems it’s been around in various forms since 1922 and family run since 1939….so yeah it’s also historical. 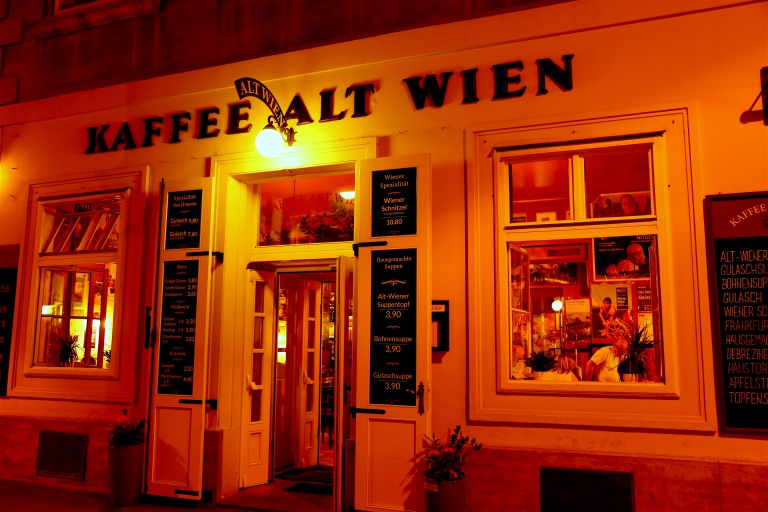 WE hope our little tale of devouring a locale with a handful of hours helps inspire you to put the long layover in the back of your mind next time you’re booking travel.  For us the complete flight ended up cheaper, the experience was sublime, and the extra stamp in the old passport is always welcome.  For about $300 combined, in the time that we’d be crammed onto a airplane or trapped in an airport, we can put a soft check in the Vienna box.