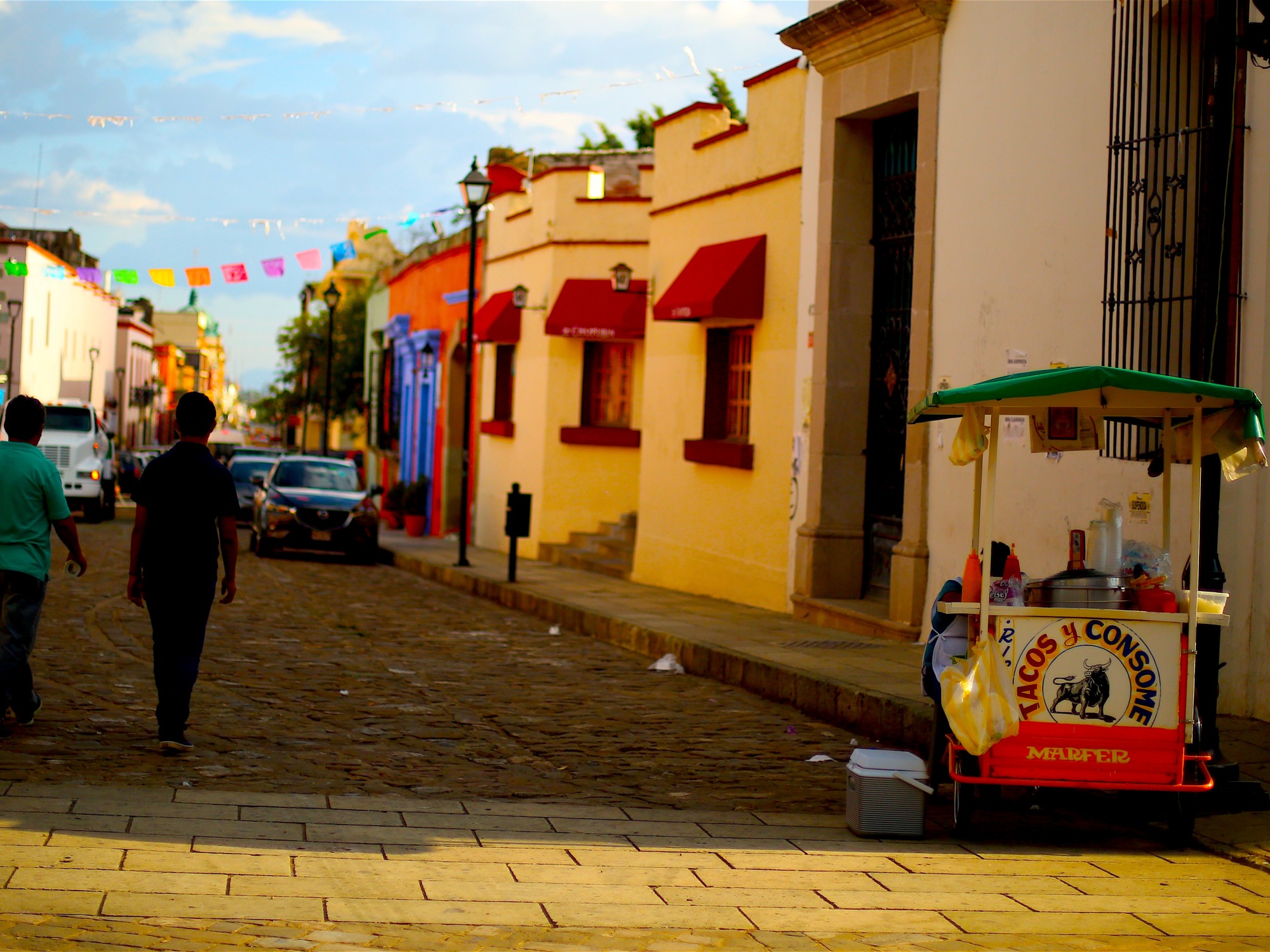 THE siren call luring us to Oaxaca has been steadily enticing us for years now.  We passed by tantalizingly close during a trip to Chiapas when we first started dating, but ended up running out of time exploring Chiapas. In recent years, especially with the rise of mezcal into the trendy spotlight, our desire to check out the land has only intensified.

“Finally after all these years I get to know this beautiful land.” d.

“Oaxaca has been top three on my bucket list for years!  I am so happy that I’m finally here!” a.

IF Mexico City felt like home, Oaxaca City felt like a dream.  Knowing we wouldn’t be cooking in an AirBnB with all the deliciousness to discover in Oaxaca, we opted to stay at Hotel Abu right in the center of of town.  Although the rooms are tiny (border line claustrophobia inducing), the renovated colonial building is cozy and has modern amenities. The restaurant downstairs is a convenient and tasty place to grab breakfast before heading out on excursions.

WE arrived giddy after the short flight from Mexico City, and hit the ground running.  On a strong recommendation from Daniela’s uncle we walked straight toward Mercado 20 de Noviembre.

CECINA enchilada, thinly sliced pork marinated in spicy adobo and grilled, was our target.  The market was literally billowing savory smoke onto the street when we arrived, and upon entering it was like walking into a hazy, jam-packed dream.  The hallway that led to the central open market was shoulder to shoulder with people, with meat in various forms hanging around flaming grills; their hawkers shouting their wares and prices.  It was sensory over load.  We literally had to walk back out, and take a minute to gather ourselves before heading back in to find our prize.

“Overwhelmed but one word ‘heaven’ for meat lovers.” d.

“I was expecting a quaint little market, but this place is intense!  This is the real deal!” a.

WHEN we finally mustered the courage to go back in, we were quickly whisked to a community table, and had to to catch ourselves up to the system.  The eager young man who scooped us from the crowd, and sat us down under the banner of Carnes Asadas “Irving”.  The locals smirked at us as we learned the protocol.  One must pick a stall for your cuts of meat, and whether thats were you also want it cooked.  From another vendor, you pick you veggie sides; including various peppers, green onions, potatoes and radishes.  Finally one chooses a third party to pick from an array of salsas.  All of this happens in seconds, and the maniacal environment heightens your pleasure when your huge basket of hand picked food arrives.  As you eat, a parade of peddlers stops by to sell you fresh tortillas, “moonshine” mezcal, and a variety of tchotchkes.

Eventually we managed to get a mountain of food; lava-red cecina, succulent tasajo, chorizo because why not, and a variety of grilled veggies.  We grabbed a stack of tortillas from the passing tortilla lady, and decided we’d eat as much as we could, but take the rest to our hotel fridge to live off over the course of the week. 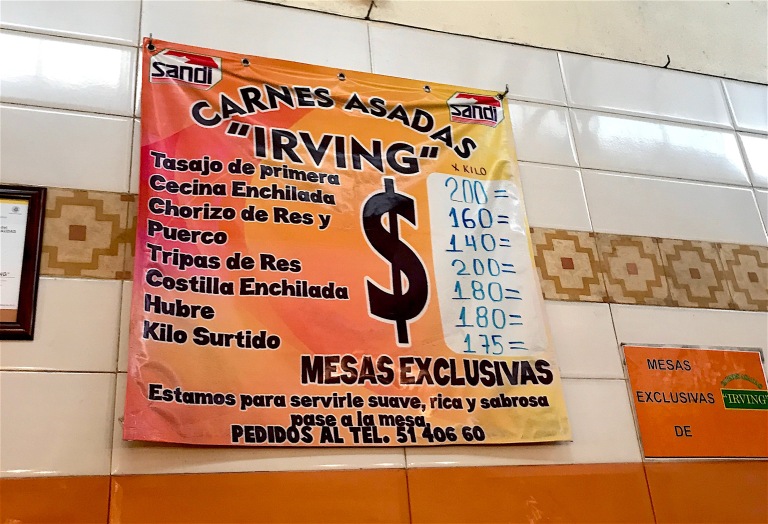 We ate it all you guys.  It was fucking delicious.  With grease dripping down our arms, we devoured the delectable bounty, washing it down with ice cold Victorias and chopping it up shoulder to shoulder with the curious locals.  We left a little dazed, partially due to the bombardment of the senses…and partially thanks to the oncoming, and well worth it, meat coma.  We needed to take a walk.

AND walk we did.  As we strolled through the historic center of town, we could feel that the whole place was buzzing with energy.  Oaxaca somehow feels like quaint colonial town (at least in it’s center) and an urbane city at the same time.  Even through meat sweats we could feel that the magic we expected here was in high supply.

“I feel like a holiday was taking place in town but i guess it was just an everyday celebration of life.” d.

“I am a little out of touch with the date, but I don’t think it’s even a weekend and this place is jumping!  All day and night it seems like a party.” a.

WITH the prestigious praise from our friends at La Contenta in NYC, we had a mezcaleria that was a definite must see.  After the Templo, we strolled over to where Los Amantes is located and were enticed by some chill house music wafting down from a rooftop bar.  We followed the groove, and accidentally stumbled across Casa Crespo.  The two teenage DJs at the open air bar tag teamed to deliver an amazing set of indigenous house music we’d never heard the likes of before.  The place was clearly a local spot as a handful of groups drank and gossiped…and this group (not DJs) were on z bender.

EVENTUALLY though, we made our way back to street level and stepped into Los Amantes next door.  In what became a daily ritual, we tried a few of their artisanal, amazing mezcales and instantly fell in love.  The room is decked out in a seemingly random array of folk art, old family photos and quasi religious totems.  The mezcalera, and each mezcalero we met on subsequent visits (click here and here to meet two of them), provided a wealth of knowledge about each varietal of agave used to craft the dozen mezcals they have available.

We began to recognize the regulars.  The lady with her daily mezcal- deep in enjoyment, the guitar playing troubadour who made extra scratch working the bar, and the well dressed 20 something who did his best to convince the three different dates he brought over the course of our visit that he was an expert in mezcal.  By the end of our stay in Oaxaca, we like to think we became brief regulars as well. 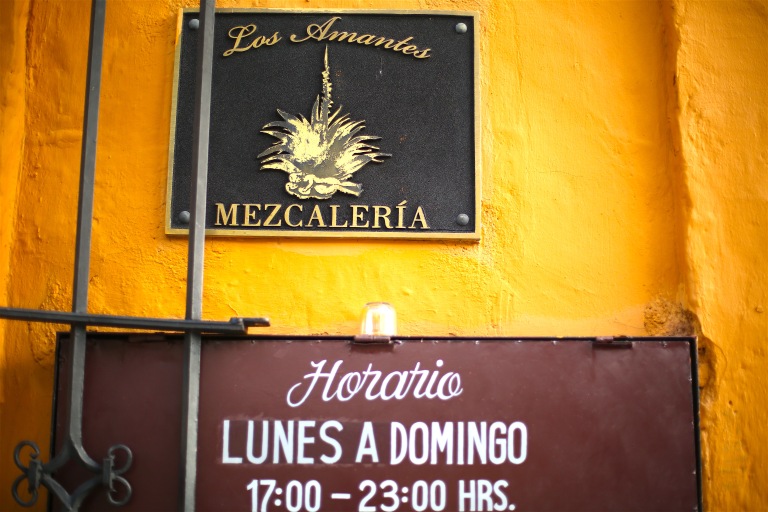 THE next morning we hopped a bus for a tour of the region’s most popular tourist destinations.  As per the usual tour loops our trip included El Arbol Tule, the Mitla ruins, Hierve el Agua, a stop at an artisanal weaver, and lastly a tour of a traditional mezcal distillery.  The tours are easy to book at any hotel, or tour company scattered about town.

Our first stop was a tree called El Tule.  You’re probably thinking “that’s lame I have trees out my window”, but this is no ordinary tree.  First of all it’s pretty well acknowledged as the largest (by girth) tree on Earth.  Maybe more impressive is that this tree is between 1200 and 3000 years old!!  So it was sprouted about the time Eric the Red was exploring the Arctic (we could probably reference some great leaders from the americas, but who knows…thanks conquistadors).  When visiting the site one of the quirks are the “niños guias” (kid guides).  These little lads study hard to be able to give a quick lecture on history of the tree, before pointing out all the funny faces and forms the tree’s knots resemble.  It’s a right of passage in the town, and well worth the propina.

NEXT up for us was the ruins at Mitla.  Known for it’s unique and intricatly carved friezes, Mitla retains a moving air.  Although the thriving civilization boasted 500,000 people when the Spanish arrived, the conquistadors didn’t understand or respect the customs of the locals.  After learning that Mictlán (the original name of the city) roughly translated into “place of the dead”, the Catholic church raised the place thinking it was a representation of “hell on Earth”.  Apparently nobody realized that the dead were honored and celebrated in pre Hispanic Mexico.  Today the friezes and handful of buildings are beautifully restored and visitors can walk through the grounds, taking in the rebuilt housing as well as the Dominican Temple that still stands.

AFTER lunch and another cruise on the bus we got to refresh ourselves in the geological oddity known as Hierve el Agua.  While the name translates to “the water boils”, and after a quick visual check it looks like a water fall; these two facts create the site’s incongruity.  The water isn’t boiling, and the “cascades” are actually mineral deposits left by the mineral laden spring water.  Don’t worry, although the water is refreshingly toasty, the bubbling is not because it will boil you alive- it’s just a natural result of the underground “plumbing”.

THE next stop was a trip to a artisanal weaver, and although it was entertaining as well as a little interesting, we felt like it was an “exit through the gift shop” kind of moment and wish we could’ve skipped that for more time at Mitla or Hierve el Agua.  Thus is the conundrum with guided tours; convenience vs flexibility.

Anyway, the last stop of the trip was what we’d all been waiting for…..MEZCAL TIME BABY!  We were dropped off at the traditional distillery of El Rey de Matatlan, and although it again felt a little gift shop in the end, it was cool to see the process of mezcal making right before our eyes.  For people like us this beats a winery tour any day.

“This is really interesting. Go for ‘crema de mezcal’ if your palate isn’t used to the strong flavor of mezcal.” d.

“maybe I should become a mezcalero…” a.

THE next morning for breakfast we found a great spot.  Cafe Los Cuiles is the staple organic brekkie spot that every backpacker town seems to have.  Favored by expats, locals and backpackers alike.  The coffee, egg dishes and cozily repurposed colonial building are all exactly what you want the morning after in the land of mezcal.

AFTER recharging at Los Cuiles, we set about finding our way to the most important ancient city in Oaxaca; Monte Albán.  As apposed to many of the more widely known ruins in Mesoamerica, you can still climb the temples, walk the grounds and feel a sense of what it would have been like to be a person in this forgotten era.  The history of the site and its inhabitants are lost, but experts think that between 100 BCE and 200 CE the society included almost 18,000 people, making it one of the largest cities at the time.  We ended up getting an almost private tour….after getting stuck in a massive mountain squall.

THAT night for dinner we went to Los Danzantes.  It was pricier than many of the local joints around Oaxaca City, but we absolutely loved it.  The service was immaculate, the space was world class and the food was local.  Everything had roots in the region, and elevated but unpretentious.

“This was a perfect mix of good service, excellent food and good vibes in a hip Oaxacan style place.” d.

“Danzantes wins for high end dining in Oaxaca!” a.

AS a sort of prologue, we’ll present one last restaurant we went to our last night in Oaxaca City.  This was actually after we’d been on the Pacific Coast of Oaxaca State for a week, and had returned to the city before our flight early the next day.  They specifically focuses on the food of the “Isthmus of Tehuantepec”, the thinest part of Mexico between the Gulf of Mexico and the Pacific Ocean.  The cocktails were fucking awesome, and the menu was full of reasonably priced but elevated regional delicacies.

THE next morning we hopped in a car, and drove ourselves into the legendary coast of Oaxaca.  We had no idea what we were about to get ourselves into, but goddamn is was worth it.